Camping always has its own food ups and downs. We ventured out to the west coast of Vancouver Island and camped at Toquart Bay. I overdid it on some fresh oysters (and some cooked oysters as well!) on my first day. After that I was basically soup-bound for the next several meals. Freshly-caught then campfire-grilled mackerel on my second day was one highlight in my otherwise limited menu.

On our final day we did the forty-or-so minute drive to Tofino and tried to take in some local fare. Parking was hell for a six-car convoy but once we were in place we saw the long line-up at Tacofino and I dived in to get a space. D & I ate there, while the others in our group tried a nearby grill place.

With the growing phenomenon of food trucks finally making it to B.C. we’re getting to know how this works. The menu described some fantastic dishes and I was sad to only be able to choose a few. I am happy to learn that they are often in Vancouver so I may have another shot.

When asked what to get D answered, “just order me whatever, but for sure something sour to drink,” not that specific but I didn’t press for more details given we were a bit harried from the drive and parking. I had free reign to choose.

I settled on a lime mint “freshie” (slush drink), a fish taco, a beef taco, and a pork burrito to share. The first thing I got was the lime mint freshie which I loved in the heat of Tofino. It was cooling and refreshing and the mint helped a bit with my stomach and gave the drink zing! D didn’t like it at all which left more for me.

Next up was the waiting for the food. I had to remind myself (and D) that the line-up when we first arrived was long, so it would make sense that we were also in an invisible food line-up, since they were assembling our creations upon order. 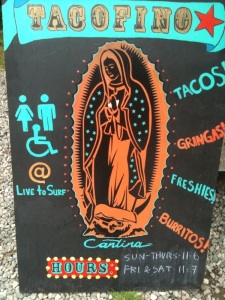 I enjoyed the beef taco. The meat was juicy and saucy and the taco included mango salsa with freshly made guacamole. It was served in the same dish as the fish taco which was equally enjoyable but for different reasons. They serve you ling cod that has been battered (light and airy, just like I like batter). It had a tomato-onion salsa (no guac unless you order it additional) but what comes with the taco really complimented the fish. I also liked the quarter-slices of lime that added another dimension to the different tastes of each taco. I can see why people were often buying the tacos in pairs. If it was dinner time I could’ve easily had four.

D had the pork burrito. This is made with a twelve inch tortilla (while the tacos are six) and stuffed to the hilt. D says it was spicy for her taste. I tried a bit of it, great taste, lots of beans and rice although I didn’t taste the pork as much as the other proteins in my tacos. For future visits I’ll probably try more of the different tacos.

I’m glad we got to try Tacofino, even if it was by accident. I didn’t even know until today that they had been featured on the show Eat St. but I can definitely understand why and can’t wait until next time!